Four Things You Need to Know About Tuck-in Selvedge Device

Due to the limitation of shuttleless looms in weft insertion, most of their fabrics have rough edges, but clean selvedge can also be achieved with the help of a tuck-in device.

The Function and Requirements of the Tuck-in Device

The Tuck-in device is an auxiliary device applied to the rapier loom, projectile loom air-jet loom, or other shuttleless looms for the formation of a tucked selvedge fabric. As shuttleless looms adopt external weft supply, the weft yarn bobbin is located static outside the weaving shed. When the weft cutter cuts weft thread, a tail of weft is left outside the fabric edge and becomes a rough edge fabric. After installation of the tuck-in device, the weft tails outside the fabric edge will be inserted in the shed with the crochet hook, and then woven into the fabric edge by beating-up mechanism, forming a neat and clean selvedge. The appearance and grade of fabric are improved. Selvage tuck-in devices are commonly used in the weaving of high-end fabrics and are mostly applied in the worsted spinning industry.

1. The tuck-in device itself has no power source, and its drive comes from the loom. Generally, the weft cutter shaft on the loom is used to transmit the driving force through gears, timing belts, couplings, universal joints, etc. Chain drive is generally not used, as the movement law of the tuck-in device should be in coordination with the movement law of the weaving reed to avoid the collision. However, the instantaneous transmission ratio of the chain drive is not constant, and the complete synchronization between the tuck-in device and the loom cannot be guaranteed; hence there is a risk of collision at certain times, so generally, the chain drive is not used. 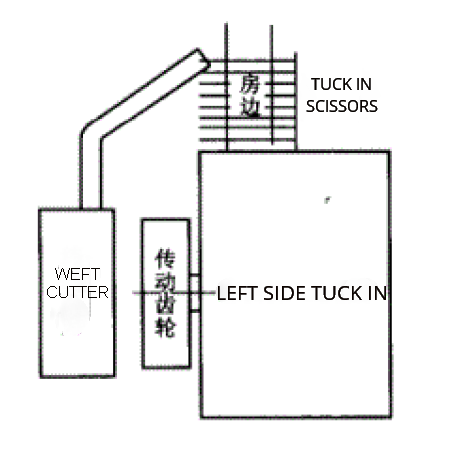 Structure and principle of motion

The device consists of two tuck-ins, left and right, placed on both sides of the cloth edge, and used in pairs. Fig.2 shows the tuck-in device. 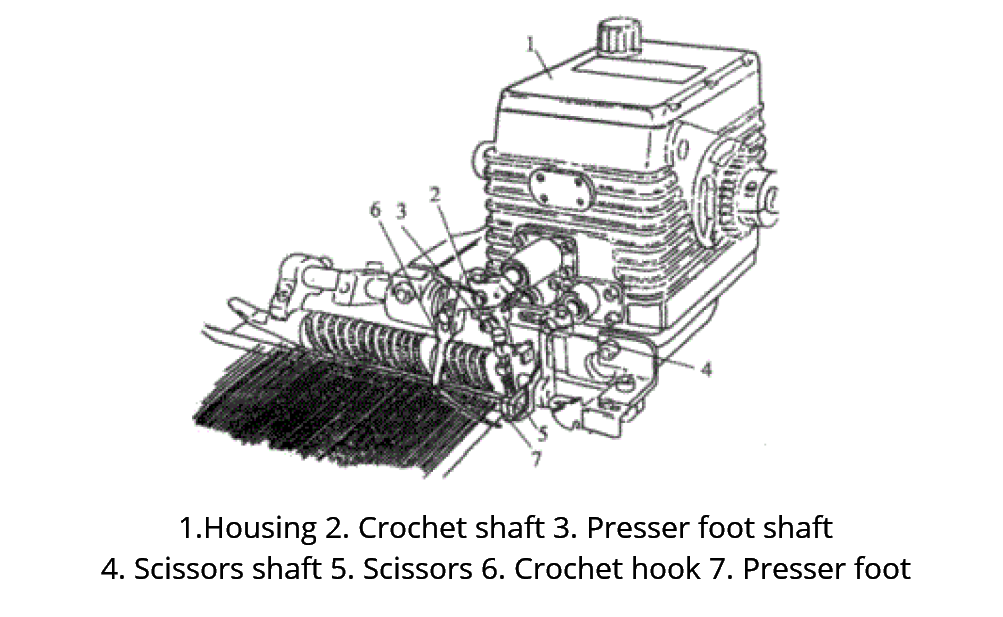 There are 4 sets of conjugate cams in the housing 1, controlling the axial reciprocating movement of the crochet shaft 2, the presser foot shaft 3, the scissors shaft 4, and the movement of the crochet shaft through the swing arm and connecting rod. The execution mechanisms of crochet hook 6, the presser foot 7, and the scissors 5 are installed respectively on three shafts, through which the actions of pressing, shearing, and hooking can be conducted.


Installation and Application of Tuck-in Device

The installation instruction of weaving reed and auxiliary reed as shown below in Fig.3.

On the left side of the loom, an auxiliary steel reed is used, through which the warps drafted are for waste selvage, so it should be plain structure. The right side generally does not require to use an auxiliary reed. The number of waste selvage warp allocated to both sides must be equal, usually 20 threads for each side, the quantity can be adjusted in different circumstances. The waste selvage warp should be economical, with a certain strength able to stabilize the weft yarn and facilitate the tucking movement.

The structure of the cloth selvage

The tuck-in device hooks the weft tail of one pick to the fabric selvage, so that the weft tail can be woven into the shed together with the following pick in the subsequent beat-up; hence the weft density in the area of the tuck-in selvage becomes twice that of the remaining part of the fabric. To obtain a better weaving result and avoid problems in the upcoming finishing process, some measures must be taken. Under normal circumstances, the fabric will not have fewer warp ends than weft picks in each centimeter. Checkered fabrics or high weft density fabrics will cause higher tension due to bigger shrinkage; thus the risk of warp breakage on the cloth edge is also higher during weaving. As the cloth edge structure is different from the structure of the fabric itself, the upcoming fabric finishing process may also meet some difficulty. Here are some methods that can be taken:


Of course, if the quality of the selected warp yarn is poor, it is recommended that better quality warps or double-stranded warps should be used for cloth selvage. Fig.4 shows the various solutions used considering the relative density of the warp and weft.

Installation and adjustment of the tuck-in device

Take the tuck-in device of Thema Excel rapier loom as an example.


Installation position on the loom

After the tuck-in device is installed on the loom, the position should be adjusted according to the following steps:
1. At the left and right side of the loom, the distance between the edge of the presser foot and the first warp of the cloth edge is 4-7mm, the proper position to be adjusted automatically during the operation, see Fig.5. 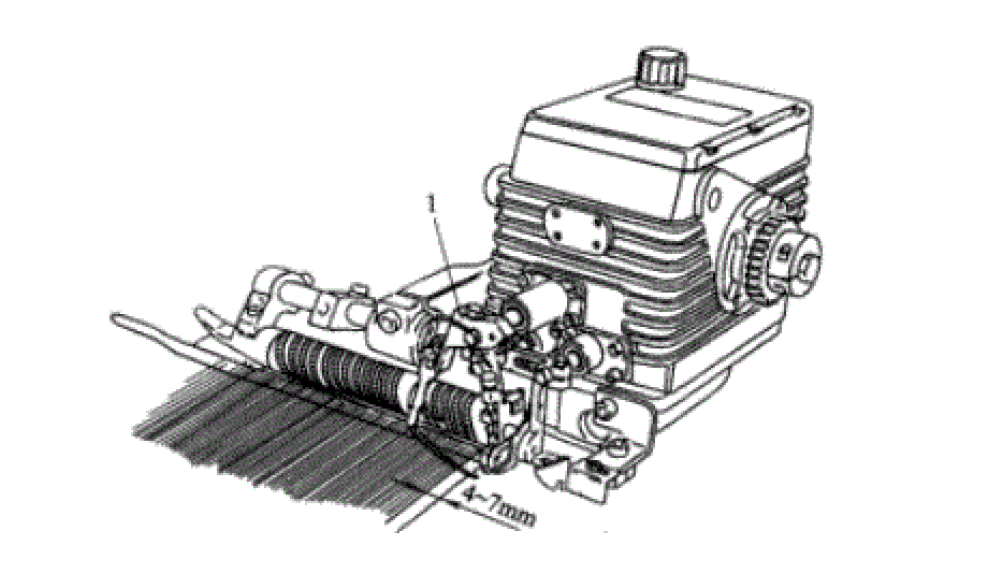 2. In the longitudinal direction of the loom, the semi-circular support and the ring temple should be adjusted to a straight line, see Fig.6. 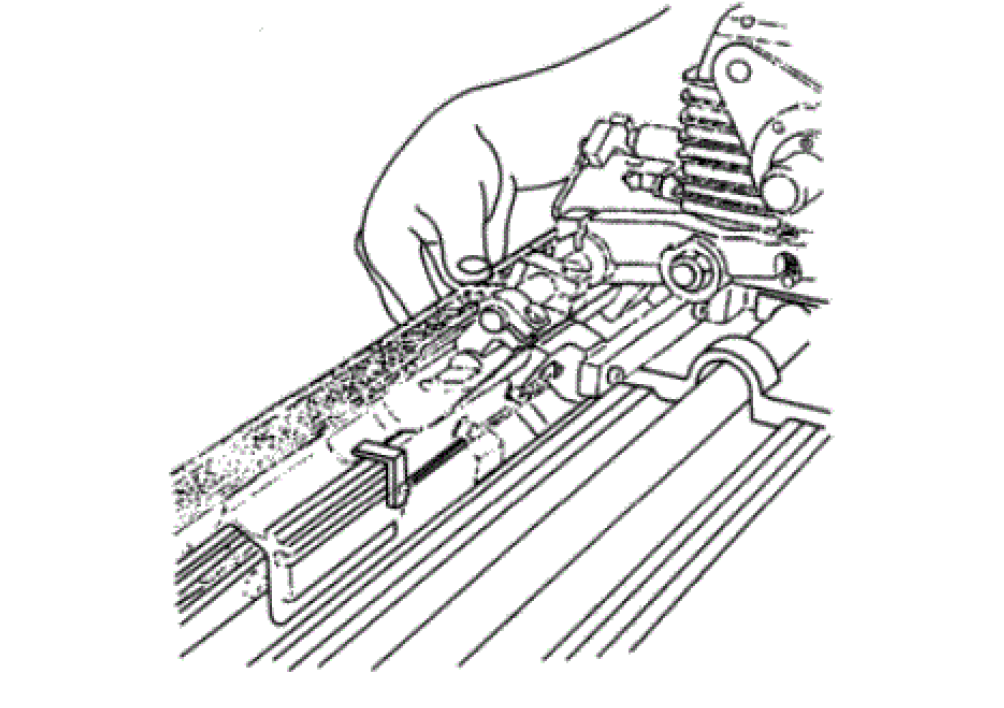 3. In the vertical direction of the loom, turn the tuck-in device manually to move the presser foot holder horizontally towards the weft yarn, and adjust the height of the device so that the weft yarn is 1 mm below the bottom plane of the presser foot holder. If necessary, insert a spacer between the tuck-in device and the base. In the meantime, make sure there is a gap between the semi-circular support 2 and the rapier guide hook 3 on the loom (Fig.7). Adjust the tuck-in device to the correct position according to the above steps. These operations are achieved by screws 4--connecting the base 5 and the gear base 7; screws 6--connecting the gear base 1 and the breast beam of the loom, see Fig.7. 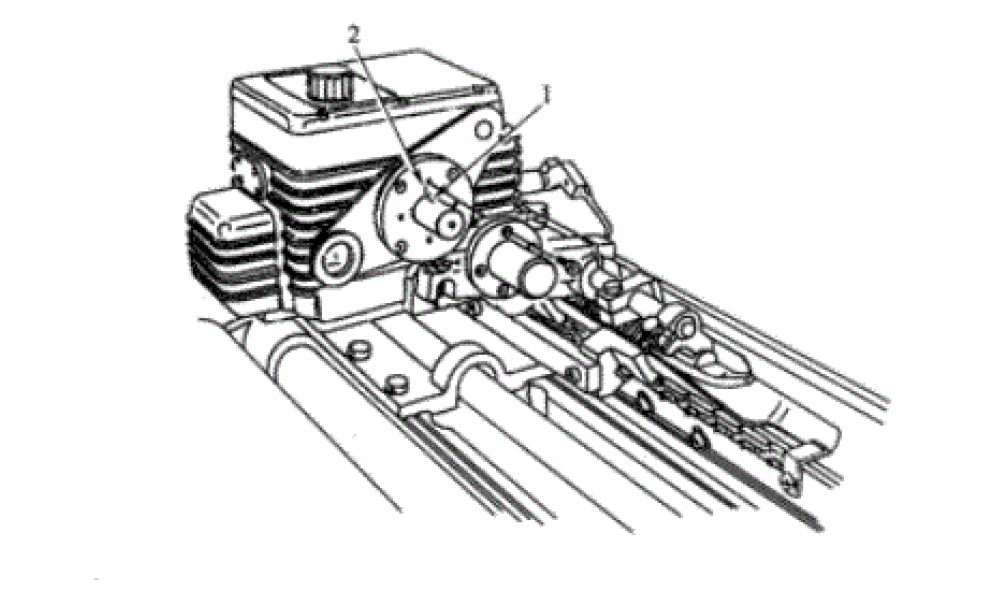 2. Turn the loom to the beating-up position 0°.

It is recommended to check the synchronization by manual inching the loom and ensure that there is no collision between the reed and the moving parts at the front end of the tuck-in device.

Adjustment of the presser foot

3. Position the scissors swing arm and the small swing arm according to Fig.10, and then tighten the screws 1 and 2. 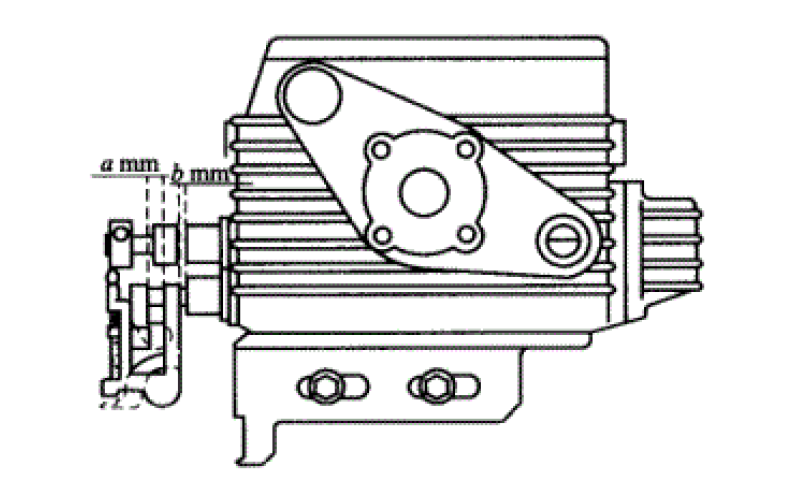 Fig.10 The position of the scissors swing arm and the small arm

If warp buckling appears during weaving, the presser foot can be moved slightly toward the reed. The looms and reeds are first positioned at the beating-up position at 0°. When moving the presser foot, be careful not to touch the steel reed, and loosen the screws 1 and 2 when moving to ensure that the position of the scissors swing arm and the small arm are equal, tighten the screw after moving in place. In this way, the presser foot and the corresponding scissors opening can be kept in a vertical position. After the above operation is completed, the tuck-in device needs to be rotated till the presser foot and the crochet hook are retracted closet to the box to ensure the correct positioning of crochet hook seat. 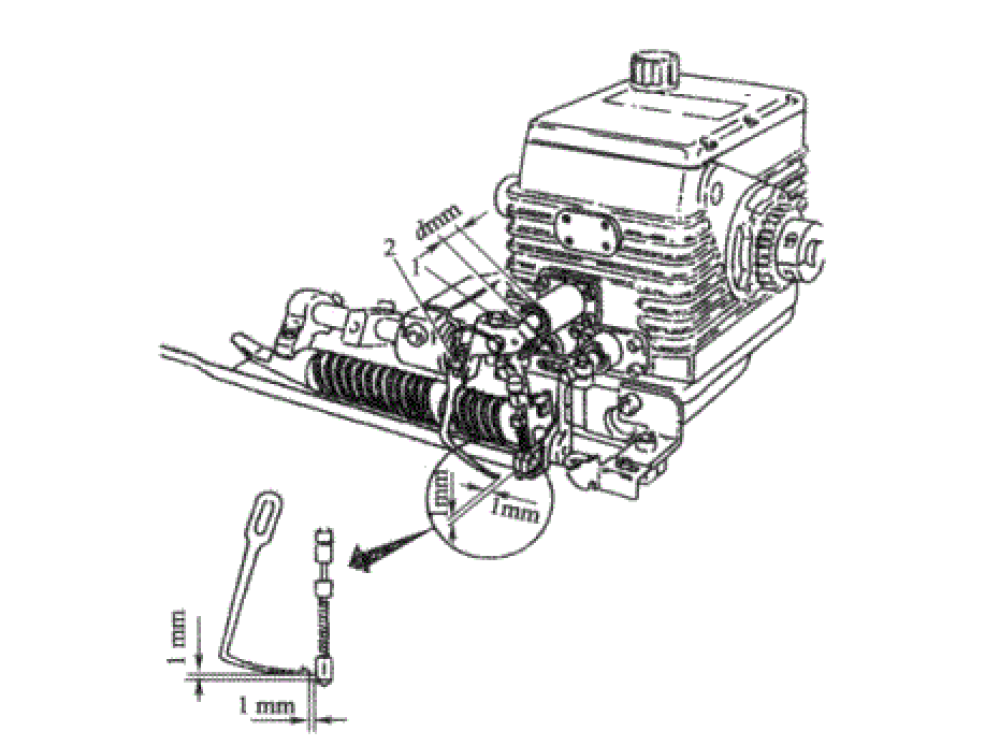 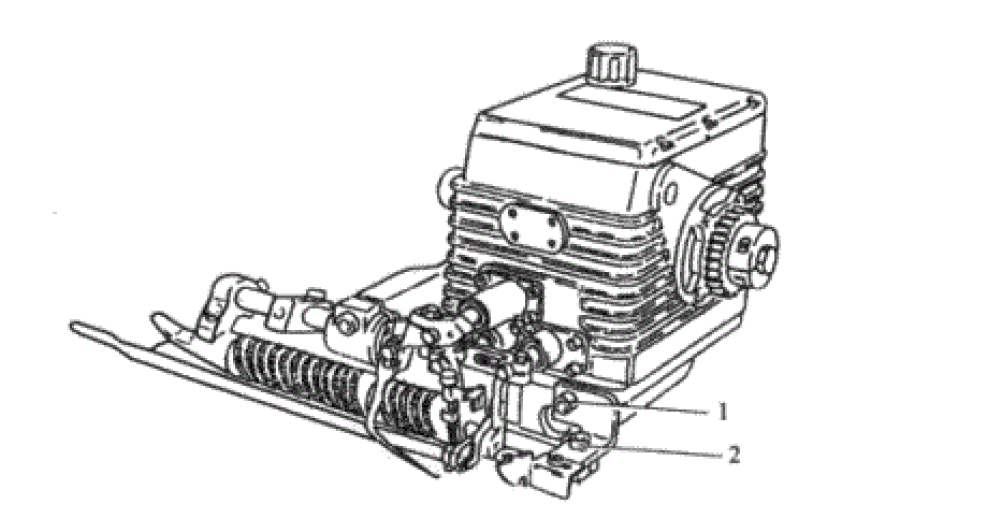 When adjusting the longitudinal depth, it should be noted that the waste edge device should not touch the reed when the auxiliary reed is at the beating position--loom 0 degree.

Tuck-in devices must be fully lubricated before use. Each head requires about 450g of oil, and add lubricant till the upper part of the lubricant mark. DMALA OIL 150 lubricant or similar lubricant is preferred.

Check the lubricant used every 5000h or annually, use a spray gun to exhaust the lubricant in the device; inject the cleaning oil, and then exhaust again; add new lubricant. The lubricant in newly purchased tuck-in device should be replaced immediately after the first month of use.

Check the NLGl3 or XM3 grease in the gear holder and add once needed.

Clean every moving part with cleaning grease every day; blow the presser foot surface with compressed air to prevent the accumulation of dust and fluffy flying. Clean and check the timing belt for transmission every 2000h or 90 days; check the parts where lubricant may leak, if there is lubricant leakage, replace the lubricant seal and other seals in time; check the wear of scissors, presser foot, crochet, replace in time if any damage.