The Brief Introduction of Shuttleless Loom 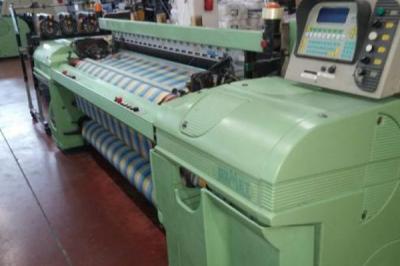 There are many classifications of weaving looms according to several characteristics:
● nature of fabric formation;
● method of weft insertion(picking) used;
● type of shedding device used;
● number of colors of the weft threads that can be used;
● type of yarn used;
● width of the woven fabric produced;
● the number of sheds simultaneously formed along the warp on the weaving machine.

According to the weft insertion method, weaving looms can be divided into shuttle looms and shuttleless loom.

The shuttle loom uses traditional wooden shuttles or plastic shuttles for weft insertion. Due to the shuttle's large size and heavyweight, and the repeatedly picking back and forth, shuttle loom will have big vibration, noise, high energy consumption, low running speed, and slow efficiency.

Rapier weaving machines are known for their reliability, performance, and versatility, i.e., the ability to weave a wide range of fabric. The weft is withdrawn from the weft package by a rigid or flexible rapier. The rapier loom has the feature of easy color change, suitable for multi-color weft fabrics, and ideal for producing yarn-dyed fabrics, double-layer velvet, terry fabrics, and decorative fabrics. In the filed of rapier weaving, the number of manufacturers is unbelievably high.

Air-jet loom is the most efficient and productive method of inserting weft across the shed. The weft is inserted by means of a fluid known as jet. The air-jet weaving machines are supplied with compressed air from a central compressor in the weave room or are equipped with individual built-in compressors. It is suitable for the production of light to medium-weight fabrics, terry towel fabrics furnishing fabrics, denim, and so on. With the development of technology, the weaving adaptability of air-jet loom has become broader and broader.

In water jet loom, water is used as the weft insertion medium to generate frictional traction on the weft with the jet of water, so that the weft on the fixed package is introduced into the shed for weaving. Water jet weaving machines are equipped with individual injection pumps to pressurize water supplied from the water main; wastewater is discharged into a drain. The water jet loom has high speed and high output and is mainly suitable for hydrophobic chemical fiber filament fabrics.

In projectile loom weaving, the gripper projectile clamps the weft thread's end and pulls the thread across the shed. The projectile loom has the advantages of stable weft insertion, good fabric quality, and less waste yarn. It is suitable for weaving multi-color weft fabrics, fine and thick fabrics, wide fabrics, and fabrics woven by special yarns. It requires a high precision of the dimensions and performance of the feeding and clamping mechanisms. Only Sulzer projectile weaving machine has achieved significant commercial penetration, although many attempts have been made.

The types of multi-shed or multiphase looms are various, the multi-shed weft insertion by rapier, chain belt, or air-jet, suitable for weaving single-variety but large-volume fabrics.

The shuttleless loom's basic feature is to separate the weft package from the shuttle or carry only a small amount of weft and replace the large and heavy shuttle with a small and light weft inserter provides favorable conditions for high-speed weft insertion. Weft cones or packages are directly used as the weft supply, and the weft insertion mechanism is entered through the weft accumulator so that the loom can get rid of the frequent weft filling action. Therefore, shuttleless looms are of great significance for increasing fabric varieties, adjusting fabric structure, reducing fabric defects, improving fabric quality, reducing noise, improving working conditions, and reducing energy consumption.

Internationally, the research and development of shuttleless weaving technology have started since the 19th century. The earliest research was on rapier weft insertion. In 1844, John Smith declared the rapier patent. The rigid rapier was invented in 1870, and the rigid rapier technology was perfected in 1899. Flexible rapier technology was invented in 1922. In the 1930s, trial production of rapier looms began. In 1951, the rapier loom was exhibited for the first time at the first International Textile Machinery Exhibition, which was gradually improved and commercialized. The projectile weft insertion was patented by the American Poster in 1911. The projectile loom was exclusively developed by Sulzer Ruti of Switzerland since 1942. The first batch of projectile looms was officially put into use in 1953. Projectile looms were exhibited at the 2nd International Textile Machinery Exhibition and gradually commercialized. Air-jet weft insertion was patented by American Byooks in 1914, and it was trial-produced in the 1950s. At the 2nd International Textile Machinery Exhibition in 1955, air-jet looms and water-jet looms were exhibited and gradually commercialized. Different forms of multiphase looms originated in Europe and need to be improved.