Discussion on the Material Used for Weaving Loom Reed 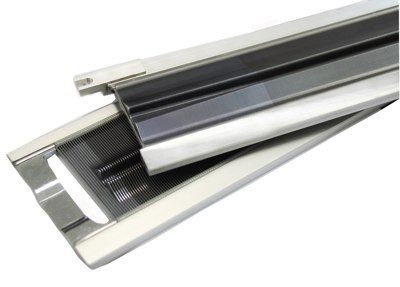 Reeds are mainly used in weaving, warping and sizing machines. Shuttleless looms are widely used in the textile industry at present. Because of their high efficiency and good quality, they have been introduced into China. The main parts of the loom, reeds, are vulnerable parts. At present, many factories have started to develop and produce weaving reed, the choice of materials is diversified according to the requirements of production technique, performance requirements, and the comparison in economic benefits. In this paper, we discuss the material of stainless steel reed produced by our factory.

In order to meet the requirements of looms, the material of reed should first be stainless steel with weak acid and alkali resistance and easy to process and have good elasticity. We have analyzed imported reeds by laboratory tests. The results are shown in Table 1 and Table 2.

According to this performance requirement, we use 1Cr13 as reed beam material, and for reed dent material, we use 1Cr18Ni9Ti, 1Cr19Ni9M and 1Cr17 three types stainless steel materials to test respectively.

Three materials, 1Cr18Ni9Ti, 1Cr19Ni9M and 1Cr17, were tested respectively. The performance changes after drawing, rolling and scrambling are shown in Figure (1), (2) and (3).

From the curve of hardness changing in cold deformation, it can be seen that the hardening rate of 1Cr18Ni9Ti and 1Cr19Ni9M is higher than that of 1Cr17. According to the final performance requirement of reed dent, the process of using 1Cr18Ni9Ti and 1Cr19Ni9M as raw materials is more complicated, which requires several softening treatments in the process, hence increasing the process and cost. There is no such problem for 1Crl7 material and only one treatment is needed. The requested hardness Rc28 can be achieved when the deformation reaches 70%. Excessive hardness is disadvantageous to the compilation.

As reed dent require good elasticity, the elastic strength of various materials is different. As shown in Figures 4, 5 and 6. The stress-strain curves shown in the figure are carried out under the same hardness conditions.

(1) Reed dent material must obtain the performance requirements of Rc27-28 hardness, and 80-85 Kg/mm2 elastic strength, and 1Cr17 can meet this standard.

(3) After 70% deformation of 1Cr17, the difference between δa and δb is small, showing a good elasticity.