The innovation and several development directions of domestic shuttle-less loom 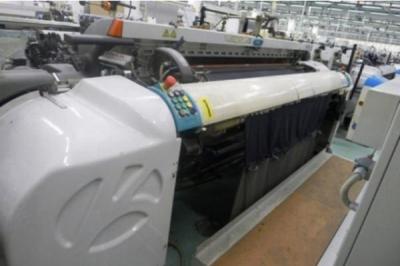 
the development of rapier looms

During the 11th five-year planning period for national economic and social development, domestic main rapier loom production enterprises have basically completed the upgrading. It means that it has developed from the Mid-range products of 350 r /min ～ 400 r /min to the design speed of 600 r /min ～ 650 r /min and high-grade products whose practical speed reaches 500 r /min ～550 r /min. At present, domestic high-class rapier loom is constantly improved and perfected. It is noteworthy that to cope with the new round of domestic high-class products market competition, foreign-owned enterprises have introduced some of today's international advanced level rapier loom to be produced in China. It is represented of Juli Bao cg-6500-160 type, e-58-s-140 type and r-880-160 Rapier loom produced of Huzhou Modern textile Machinery Co., Ltd.,. These three high-end trademark machines’ speed respectively reach 580 r /min、560 r /min and 510 r /min. It can be foreseen in the future development that there will be a rapid development of domestic high-grade rapier loom and the market competition will tend to be fierce.

At present, the foreign Air-jet looms are represented by European models with excellent weaving performance and innovative mechanical and electrical integration structure, modular design concept. Especially in recent years, European manufacturers lead and dominate the innovation and development of energy-saving and pneumatic weft insertion technology in energy-saving technology research & development and application. And the production import volume increased year by year in China.

In China, in terms of speed and latitude, domestic Air-jet loom has also stepped into the ranks of high-grade Air-jet loom. Among them, GA708-S-190 of China textile Machinery Co., Ltd., JA91-190-2C-PC6 of Shandong Qingdao Tianyi Group Red Flag Textile Machinery Co., Ltd., EA-800 Air-jet loom of Shanghai Chunrui Machinery Technology Co., Ltd., etc. represent the latest technology of the domestic model. But we can objectively see that, domestic air-jet looms still at a lower level in the comprehensive variety adaptability, control system of mechatronics, information, intelligence, technology research and development applications of energy-saving, and so on, which still need to be further improved. With the advent of the low-carbon economy era, domestic and foreign manufacturers attach great importance to the subject of reducing the energy consumption of Air-jet looms, which supposed to be the development direction of the further perfection and innovation of Air-jet looms.

the exploit of shuttle-less looms

It has lasted for more than 30 years that the domestic developed rapier and air-jet loom with rather high starting point of introducing of technology or improving loom. Different grades of machines’ manufacturing technologies are very mature, despite there is still have a certain distance compare with foreign products, but in the general application conditions it can already be completely self-sufficient. Since 2011, the production volume of domestic rapier looms and air-jet looms has exceeded the import volume in real sense.

At present, with the development of suitable national conditions, based on domestic self-sufficiency, cost-effective with independent intellectual property rights, domestic mainstream rapier loom and Air-jet loom has entered a new stage of development. Moreover, China has already joined in WTO, so we need to pay more attention to protect own intellectual property in developing the weaving machine of independent property right.