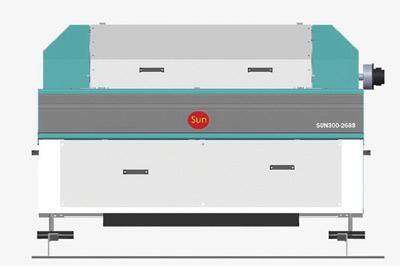 Jacquard weaving loom machine is a kind of loom with jacquard equipment, which can weave patterns on fabrics. It was first used in Han Dynasty. In ancient times, ordinary looms used one or two hedgehogs (parts for lifting warp lines) to lift singular or double warp lines at the same time to form shuttles for weft feeding and beating-up, and to weave plain woven fabrics. Jacquard weaving loom machines have many healds, which control hundreds of warp threads for different lifting motions. They are interlaced with interlaced warp threads to form fabrics with various patterns and character patterns.

On the Jacquard weaving loom machine, the pattern plate is sleeved on the flower tube. Each weft is woven over a pattern plate, and the pattern tube is pressed against the transverse needle once. When there are holes in the pattern plate, the head of the horizontal needle extends into the holes in the pattern plate and the flower tube, so that the hook end of the straight needle is still hanging on the lifting knife. When the lifting knife rises, the straight needle rises along with it, and the heddle is lifted by the first hook and through wire. At this time, the warp thread penetrating the heddle eye is also lifted, forming the upper layer of the shuttle mouth. The heddle hammer is suspended in the lower heddle ring of the heddle. When the shuttle closes, the weight of the heddle hammer plays the role of healing. When there are no holes in the grain plate, the horizontal needle recedes through the convex head to push the corresponding straight needle so that the hook end of the straight needle is detached from the lifting knife. Therefore, the filament and warp connected with the straight needle are not raised, and the warp filament sinks below, forming the lower layer of the shuttle mouth. Therefore, the movement of each warp is determined by whether there are holes or no holes on the pattern board, and the holes on the pattern board are rolled according to the design requirements of pattern and organization, so the movement of the warp meets the requirements of pattern and organization.