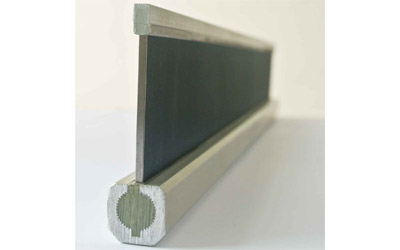 1.Introduction
The failure modes of reed used in four-bar weaving looms usually have four characteristics. First, from the reed width direction, damage evenly distributed on the side of reed dents. This kind of damage occurs on almost all reed dents, mainly the wearout failure. Second, from the reed thickness direction, unevenly distributed damage of weaving reed surface. This kind of damage mainly occurs at both ends of the reed, mainly the plastic deformation and fracture of the reed. Third, The damage of the wide width loom more serious than that of the narrow width loom. The failure of the reed is basically related to its design, manufacture and use, and other factors. Research on the failure mechanism of reed will be beneficial to improve the design, manufacture and application process of reed.

2.Failure Mechanism
During weaving process, the reed serves under complex conditions including vibration of beating-up mechanism, friction of warp yarn and impact of weft insertion mechanism. The coaction by many factors in the same time leads to the failure of reed.
2.1 The failure of reed in beating-up process
The failure of reed in beating-up process is mainly caused by the vibration of reed's swing and the friction of hard particles on warp yarn.
2.1.1 Vibration wearout and fatigue failure
Due to the swing of reed slay and the extreme acceleration, the whole reed will experience periodic vibration, which results in the vibration wearout of the reed side under the action of warp yarn and further the wearout or peeling of the blue film on the reed dents. The initiation of micro-cracks and the critical crack propagation (especially the crack propagation along the side direction perpendicular to the reed) appear and eventually lead to the fatigue failure of reed dents.
2.1.2Abrasive wear
The combined action of abrasive wear and vibration wear is the main reason of the blue film flaking on the side of reed dent, the abrasion on the surface of substrate and the formation of grooves.
2.2 Reed failure in weft insertion process
The failure of reed in weft insertion is mainly caused by the impact force caused by shuttle flying close by the reed.

3. Discussion
3.1 Failure of reed
The failure of reed in beating and inserting weft is caused by the vibration and wear of reed mechanism, warp friction and shuttle impact, and further lead to the abrasive wear, fatigue damage and impact damage. That results in the wear and peeling of reed blue film, matrix damage, plastic deformation and fracture. Impact damage is the most harmful factor to the service life of reed, also the main factor that causing serious damage to reed dents at both ends, and the main factor of serious damage of reeds on wide width looms.
3.2 Methods to improve the service life of reeds
3.2.1 Design requirements
The basic goal is to keep the reed with a good strength, and enough obdurability. Homogeneous or heterogeneous materials with different strength and toughness will be applied to design reed. In the metallographic battering of reed dents, it is important to retain fine and dispersed undissolved carbide particles, partially deformed and strengthened ferrite (incompletely recrystallized annealed state), uniformly distributed ferrite (normalized state) or appropriate amount of retained austenite (withered state), as this practice will important for reed used on wide width looms.
3.2.2 Manufacturing technology
In order to meet the above design requirements of reed, homogeneous materials with high strength and toughness or heterogeneous materials with higher strength and toughness can be selected for reed dents at both ends of reed. The mechanical properties of reed can be guaranteed by heat treatment and surface treatment. The traditional incomplete normalizing (i.e. the heat treatment process between normalizing and recrystallization annealing) can be replaced by incomplete recrystallization annealing, normalizing or low temperature quenching and tempering treatment with better effect in surface treatment. In the process of surface handling, it is necessary to improve the traditional bluing process aimed at improving the density, uniformity, thickness of the bluing film and its adhesion with the matrix. In addition, other surface treatment processes with better effect can be considered. The smoothness and evenness of reed can be guaranteed by controlling the quality of reed dents. The improvement of strength and toughness of reed and the consistency of its geometric size and shape accuracy will be beneficial to improve the resistance from impact and fatigue.
3.2.3 Application process
In order to give full play to the potential of reed, technological changes aiming at reducing vibration and shock can be carried out on looms, such as minimizing the weight of shuttle as far as possible under the condition of ensuring smooth weft insertion of shuttle; repairing damaged reed dents in time; adding vibration absorption mechanisms with good or better effect and etc. In order to improve the wear resistance of reed, the warp purity need to be strictly controlled and the content of hard impurities should be minimized. In addition, a cleaning device can be added to remove the attachments on the warp surface, and to reduce the particles entering reed to a minimum.

4.Conclusion
From the aspects of designing, manufacturing and using, the service life of the weaving reeds can be improved. The main method is to improve the strength and toughness of reed dents and their surface film quality. In addition, some new processes and devices can be used to fully exploit the potential of reeds.