The working principle of towel loom 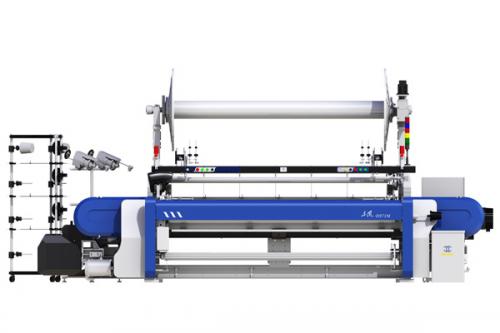 1. The formation of towel fabrics

Towel fabric is the textile that the towel organizes to form the hair circle. It is not only the daily necessities of people's life, but also a textile ornament. It has dense and soft fur ring, good moisture absorption, heat insulation, wear resistance and so on. The towel fabric is bright, fresh and beautiful. It can be divided into face towel, pillow towel, bath towel, square towel, towel, terry cloth and so on. Therefore, in all kinds of textile products occupy an important position. Recently, with the continuous improvement of people's living standard and the rapid development of foreign trade, the demand of domestic and foreign markets for the quality of towel products and varieties of flower and color is getting higher and higher. Towel fabric is organized by the hair circle. There are two kinds of warp yarns that make up the towel fabric: one is called the ground warp, which is interwoven with the weft to form the fabric; The other is called the MAO sutra, which is interwoven with the weft, forming a loop of hair that covers the surface of the ground cloth, making the surface of the earth's cloth erect a dense, uniform loop of hair.

The fuzz device is one of the main mechanisms of towel loom and is one of the main differences between towel loom and ordinary loom. Its function is to make the hair warp, the ground classics and the weft interweave to form the wool circle, make the towel fabric. The essence is that the weft of the reed can be obtained in the weft. Therefore, the performance of the hair mode and the working performance will directly affect the form and quality of the ring. Of course, there will be the wool warp conveyor and other ancillary agencies. Due to warp yarn and warp tension is not the same as the computer tension (in the general about 4 times larger than MAO's computer by tension), so the let-off amount is different also, for this towel loom need two for winding to warp and wool warp beam respectively. The wool of the towel loom is usually placed above the axis of the ground, but some of the new towel looms need to adjust the position of the two in accordance with the need of the weaving operation. At present, the advanced towel loom has a set of hair and hair devices that can be freely set up. The device can not only set the height of the hair, but also can switch between three weft, four weft, five latitudes, six weft and seven weft. The number of weft pile in different mode and set arbitrary burr height, can make the loop changes, can form the different vibrations of warp and weft loop, wavy and different patterns that produce a unique pattern.

Many different kinds of terry towel loom institutions, but in terms of fuzz way, and can be divided into moving reed type and movable type two kinds big, so-called moving reed hairines refers to by changing the reed beating-up motion process to realize the looped organization. So-called moving hairines refers to the weaving a looped into a complete organization of weft yarn, the reed traverse the same, but change the cloth fell position, which played the first and second weft, cloth fell from reed has a certain distance, a third weft, woven mouth moved towards the machine after forming a loop

Fabric fuzz institutions is moving through the back rest to drive the fabric, change cloth fell position, and position of the reed and reed beating-up always remains the same, so reed and cloth fell in the heart before a distance, so as to achieve the aim of fluff.

The reeding fuzz mechanism is used to achieve the loop by changing the motion of the reed. Played the first and second root weft reed position falls behind the cloth fell, a third of reed increase when weft beating-up motion process, the weave mouth and beating-up point-point coincidence, the reed weft to weave together the three mouth so that the tension of small towel yarn fuzz circle arch to achieve. In general, the collision-type hairline mechanism is very similar in structure, and the following is the introduction of the small sley foot starting mechanism.