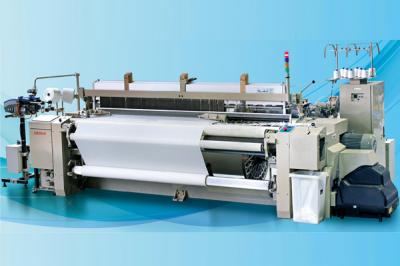 The new loom is the development direction of weaving machines and the inevitable trend of the development of weaving technology. Compared with the shuttle loom, the new loom improves the adaptability of the fabric, the quality of the fabric, the weft insertion rate and the production efficiency, reducing the noise and the labor intensity of the workers. Shuttleless loom in nearly 70 years of research, development, has formed the gripper loom, air  jet loom, rapier loom, the situation of the three pillars of high speed and is heading, intelligent, the direction of automation, reliable and versatile. In recent years, our country a large number of introduction of the jet and rapier loom, especially in Shaoxing, Zhejiang province, Xiaoshan district, not only changed the situation of the three pillars of and become the development direction of new loom.

The type and characteristics of the new loom

A new type of loom

(1) The loom of traditional weft insertion system usually belongs to single shuttle loom, including jet, water jet, projectile and rapier loom.
(2) There are two kinds of looms for the non-traditional filling system, one is the polyphase or the multi-shuttle loom, the other is the knitting machine.
(3) The looms that produce special fabrics mainly include the weaving planar three-way fabric and the weaving loom, which has been developed and developed with the development of industry, especially the aerospace industry.

Features of the new loom

Shuttleless loom will replace the shuttle loom has become the consensus of people, but all kinds of shuttleless loom alternative on each other but each has his strong point, both from the technical characteristics and look from actual sales, each model has its specific market segments.

The variety of rapier and jet looms is good. Rapier looms are made of cotton, wool, silk and linen, and are suitable for weaving blended fabric, especially for weaving fabric. Jet loom is suitable for knitting wool fabric, chemical fiber filament fabric, glass fiber fabric and denim, towel fabric, etc.

According to have been introduced, the application of the loom, a general import air-jet loom is RMB 300000 Yuan or so, each day the profits are more than 1000 Yuan, that is to say, usually a jet loom will pay back your investment in less than a year, this is what the current our country the main cause of a large number of imported air-jet loom.

Jet, rapier looms with high weft insertion rate, fast speed and high yield per unit area. For example, Tsudakoma company ZAX series jet loom, the maximum speed can reach 1800r/min, with the highest filling rate exceeding 3200m/min; The maximum speed of the Leoardo rapier loom at Vamatex is 830r/min, and the insertion rate reaches 1500m/min, which is more than the shuttle loom, the reed width reaches 3.8 m and wider, and the weft yarn can reach 12 colors.