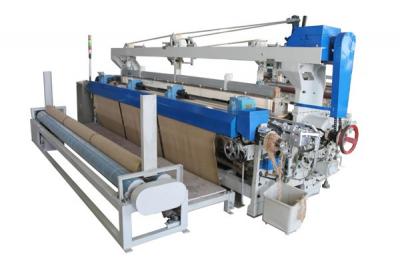 Looked from the realistic situation, there do existed three major problems, and the Solidiance consulting firm Asia-Pacific President Duette predicts that 6 big Japanese companies will account for half of China's industrial robot sales while China's 4 largest robotic equipment makers add up to only 5% of China's market share. In the market of Chinese robot, foreign robot giants are in a monopolistic position, despite the rapid development of China's robotics industry in recent years. Domestic robot companies have been catching up, but still in a weak position.

A study from Tsinghua University shows that there is still a big gap in competitiveness between local brands of industrial robots and foreign brands. 2012, the division four giants fanuc, Yaskawa Motor, Kuka and ABB accounted for 53.8% of the market share.

In the entire robot industry chain, the main upstream key components, midstream equipment manufacturers and downstream industry application of these three blocks, domestic enterprises are mainly concentrated for the system integrators to achieve downstream applications, that is, to achieve profits by the procurement of foreign robots and carrying out the corresponding program design for downstream customers. But the upstream of the industry chain lack of the support of core parts manufacturers and key components still lags far behind foreign enterprises, as a result it has the problem of heteronomy for long-term.

A industry insider told reporters that domestic enterprises in the reducer, which is the key components of robot joint parts are generally depends on imports, "reducer is an important factor of restricting the cost of domestic industrial robots. Not only good equipment, but also good materials and processes are needed for researching reducer while materials need to be absolutely wear-resisting."  And that can not catch up with foreign technology for a while. ”

2. Tough run-in between people and machine

2007, Aestheticism chairman Huang Jianping went abroad to visit. He was so marvel at the western Advanced automation production line that he spent more than 4 million introduced seven or eight automation equipment after coming back, which was rejected by some middle-level.

"A machine is as little as a hundred thousand, or as much as five hundred thousand or six hundred thousand, and it does not pay to reduce a few people." At that time, the Plant Production Executive also complained. More difficult is, some workers like Dai Mingzhi do not want while some do not understand how to operate the machine: "I am full of strength. Why bother operating the machine for what can be done by a lift or a move?" ”

Zhong Weiqiang said that the new production line has just been opened, "The machine always got stuck.". It was so serious that sometimes had to stop line to repair. However, the kiln of ceramic tile factory needs to keep working for 24 hours without pausing and it costs more than 5,000 blocks of energy and equipment maintenance for empty kiln running for one minute. Time and again, the workers back to "all to their own movement" of the original state from the "automatic". So more than 4 million of the machines had to dismantle less than a year, being in limbo.

Chen Dance Qin told reporters that at the begin when robot has just entered the Australian-American high-tech production workshop, workers was too afraid to get close, fearing that their improper operation would damage this new technology machine. Moreover, the manipulation of the robot's code had no sense for the workers, which also increased the alienation between each other.

However, now the relationship between the two has become increasingly close after nearly half a year run-in. Although the automation of the production line greatly improved, the efficient operation of the robot is still inseparable from human’s cooperation.

3.How to deal with the conflicts of the workers after the substitution?

Zhejiang Xinwei Plastic Co., Ltd. has been expanding the scale and continuously recruiting staff since its plant for more than 4 years. In order to seek greater development, the management of the enterprise decided to introduce advanced equipment and technology to improve production efficiency and product quality last December.

However, a problem highlights: after the introduction of advanced equipment and technology, many artificial jobs will be done by machines, which means that there will be a group of surplus labor. According to the expectations of the enterprise's managements, this will be a one-off cut of more than 50 workers, nearly one-third of the total number of employees. That’s the reason why machine substitution incurred the disputes between enterprises and employees some time ago.